St. Augustine’s City of God on the sacrifice of the Mass

Today’s guest post is by Brandon Rappuhn, a Logos copywriter.

Verbum makes it easy to compare texts and perform theological and ecclesiological studies across the history of the Church. Since today is the Feast of St. Augustine, let’s take a journey through the history of our faith by way of his writings. In this journey, I’m curious to see how the “sacrifice of praise” from our Mass is echoed throughout Augustinian ideas. Let’s stick with his City of God or we could easily be here all day. 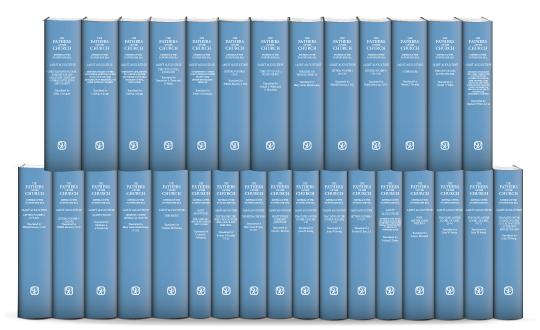 Therefore, this short and simple and soul-saving expression of faith, ‘Put me, I beseech thee, to somewhat of thy priestly office, that I may eat a morsel of bread,’ is itself the ‘piece of silver,’ [read: praise] because it is brief and is the word of the Lord Himself dwelling in the believer’s heart. Earlier in the text He had said that He had given the house of Aaron food from the Old Testament victims: ‘I gave to thy father’s house for food of all the fiery sacrifices of the children of Israel’—that is, of the Jewish sacrifices. Accordingly, at this point, He said: ‘That I may eat a morsel of bread,’ for this is the sacrifice of Christians in the New Testament.

In the previous paragraphs, Augustine mentions that the order of Aaron has dissolved away and the order of Melchisedech has been perfected and translated into Christ’s priesthood, culminating in the consecration of himself as the Eucharist. In fact, his whole argument is to the fulfillment of the prophecy in 1 Kings 2:27-36 of the ending of the priesthood of Aaron while yet retaining a priesthood of an eternal order.

Let’s be clear: the “morsel of bread” is indeed a foreshadowing of the Eucharist, but the sentiment, “Put me, I beseech thee, to … thy priestly office, that I may eat…” is the foreshadowing of our sacrifice of praise, our desire to commune with God and to join with him in his Paschal sacrifice. Did Augustine come up with this idea on his own? I wouldn’t think so. Origen echoed this sentiment barely a few centuries before Augustine.

And well over a thousand years later, Vatican II brings it full-circle:

[The people] should be instructed by God’s word and be nourished at the table of the Lord’s body; they should give thanks to God; by offering the Immaculate Victim, not only through the hands of the priest, but also with him, they should learn also to offer themselves; through Christ the Mediator, they should be drawn day by day into ever more perfect union with God and with each other, so that finally God may be all in all. (Sancrosanctum Concilium 48, emphasis mine)

This is why, in the Mass, sometimes referred to as the “sacrifice of praise,” the priest prays in the Eucharistic prayers, “Remember, Lord, your servants, N. and N., and all gathered here, whose faith and devotion are known to you. For them, we offer you this sacrifice of praise or they offer it for themselves and all who are dear to them…”

For a short time, you can get a library of St. Augustine’s writings on sale with coupon code AUGUSTINE14. This offer ends September 1, so don’t miss out!